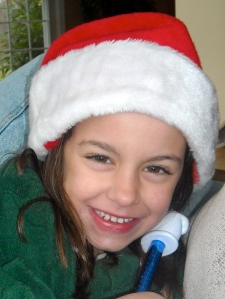 And she expected a response! After all, when six-year-old Ava had complained about never getting any letters in the mail, her mom explained that in order to receive letters you need to write letters.

In order to get letters, Ava decided that she’d write to Santa Claus and thank him for the presents he had recently given her. While she had his attention, Ava figured she would also ask Santa why he hadn’t eaten all the cookies she and her sister had left. Letter written, Ava mailed it — and waited. Thus began a multi-letter correspondence between “Santa” and Ava.

Ava’s real letters are the inspiration for My Pen Pal, Santa, a read-to-me picture book written by Melissa Stanton (aka: Ava’s mother) published by Random House. The illustrations by artist Jennifer A. Bell will make children of all ages want to carefully examine and revisit each detailed drawing for insight into Santa’s world.

Many who’ve read the story — which is told through a year’s worth of once-a-month letters — agree with editor Suzy Capozzi’s assessment that Ava may be the Virginia O’Hanlon (that’s the “Yes, Virginia, there is a Santa Claus” girl) of the 21st century.

By the way, Ava, now 11, no longer writes regularly to Santa, but the Tooth Fairy still receives thoughtful and inquisitive notes upon her occasional visits. My Pen Pal, the Tooth Fairy is in the works.