No, this isn’t Adults Only content in that way! My Pen Pal, Santa is a children’s book, after all. 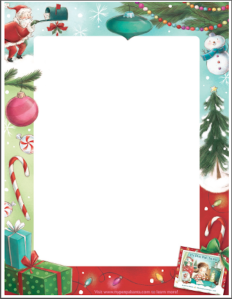 Write to (or as) Santa with a free “Santa stationery” download from “My Pen Pal, Santa.”

This page is age-restricted because it acknowledges that — as we know (or most of us know) — children can’t really receive letters from Santa.

Despite that truth, your child, or any child in your life, can have a pen pal correspondence with Santa Claus just like the real Ava (my daughter) did (with me).

Here’s My Pen Pal, Santa’s back story, and how you can create similar memories:

*  Soon after Christmas, a six-year-old Ava started groaning about never receiving any mail. I explained that in order to receive letters, she needed to write letters. That simple statement of fact resulted in Ava writing a thank you letter to Santa, which she presented to me in a sealed envelope in order to secure a stamp.

*   I gave Ava the stamp but explained that while writing Santa a thank you letter showed really good manners, Santa typically did not answer the letters he received. Unperturbed, Ava addressed her envelope to the North Pole and put it in our mailbox. She fully expected to receive a response.

*   I intercepted that letter before our mail carrier arrived. The next day, and the next and the next, Ava asked if Santa had responded. Knowing how much she wanted to receive mail, I wrote a response on festive stationery and placed “Santa’s note” (with a North Pole return address and a Christmas sticker as a stamp and postmark) in our mailbox.

Ava then wrote back to Santa. “He” responded. She responded to that response, and so on.

A benefit of the ongoing correspondence was that it motivated Ava to write letters and draw pictures to illustrate her thoughts. The book My Pen Pal, Santa, and the letters and drawings that inspired it, are wonderful keepsakes that Ava, now 11, and I both cherish.

P.S. The ending of this book is of course fictionalized. If your child or a child in your life writes to Santa (you!) and asks for an in-person, Christmas Eve visit like the book Ava received, you may need to spin your own tale about why he is unable to grant that particular request. If your household needs some Santa-worthy stationery — for writing to or as Santa — illustrator Jennifer A. Bell has created some you can download for free.